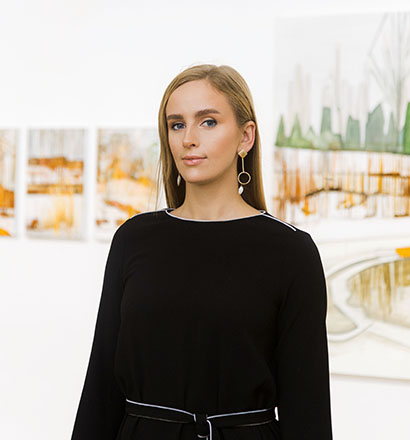 MYKOLĖ (b. 1987) studied at the École nationale supérieure des Beaux-Arts in Paris, where she obtained her bachelor's and master's degrees. He spent more than eight years in Paris. From 2015 to 2017 he lived and worked in Copenhagen. He has been living in Vilnius since 2017. Mykolė's work is dominated by the theme of landscape. Especially many works have been created about Lithuania, although there are also foreign landscapes. One of the winners of the Baltic Art Competition Young Painter's Prize 2013. Represented Lithuania at the UNESCO Art Camp in Andorra in 2016. In the same year, Michael's series of works was awarded as a prize to the best French riders during the "Great Fontainbleau Week". In 2017, he resided at the Saari Art Residence. In 2019, she represented Lithuania at an artists' meeting in China through the mountains and seas. She has organized solo exhibitions in Vilnius, Paris and Denmark. Participates in group exhibitions, residencies and plein airs taking place abroad. He had the honor of getting to know Jonas Mekas, visited the studio of Pranas Gailius, collaborated with Dominique Gauthier. The complete collection of paintings and drawings consists of over 250 works.

Landscapes dominate Mykolė's work. The choice of the genre distinguishes it from the direction of the young generation of Lithuanian painters, most often the following figurative paintings, often clearly socially and politically engaged. Landscape, especially landscape, is often associated with naturalistic nature studios or romantic and idealized images of native fields. However, Mykolė's work confirms that the contemporary genre of landscape does not lack contact with the latest art trends, that it can be interesting and relevant.

The painter chooses simple, easily recognizable motifs: fragments of the landscape, sometimes supplemented with buildings, engineering constructions, sometimes individual human figures appear in the compositions. Different seasons and times of day, weather conditions, and the colors characteristic of the landscape at that time are depicted. In stylized, generalized landscapes, the painter enjoys a variety of colors and structures, emphasizing the rhythm of natural elements. By inserting architectural objects or other signs of human activity into landscapes, she discovers harmony in the contrasts of strict and free forms (such as the rhythm of plowed field lines and tree branches). Mykolė uses single-layer paintings, so the works look light and transparent. A canvas that shines through a thin layer of paint gives the paintings an atmospheric glow.

In Mykolė's work, Lithuanian landscapes appeared while studying in Paris as memories of the time spent in Lithuania, as an expression of longing for the homeland. They depict real places that are important to the artist and that she has visited. In nature, she seeks a counterweight to the city, its dynamics, noise. So the landscapes are empty, spacious, meditative. Melancholy, lyrical moods are often felt, complementing the autobiographical history of the emergence of landscapes. Thus, although real, they also become psychological inner landscapes - places that are consciously and subconsciously experienced internally. Geometrized, flattened shapes of landscapes look scenographic, as if empty of the scenery of a nostalgic dream scene. (Justina Augustytė)

We use cookies to improve your experience on our site. By continuing browsing, you accept to our cookie policyACCEPT
Manage consent

This website uses cookies to improve your experience while you navigate through the website. Out of these, the cookies that are categorized as necessary are stored on your browser as they are essential for the working of basic functionalities of the website. We also use third-party cookies that help us analyze and understand how you use this website. These cookies will be stored in your browser only with your consent. You also have the option to opt-out of these cookies. But opting out of some of these cookies may affect your browsing experience.
SAVE & ACCEPT
Powered by